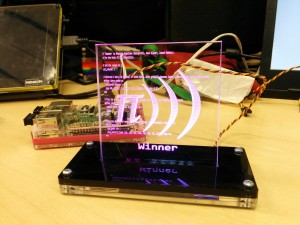 Two weeks before the Raspberry Pi third birthday party, I was asked by Carrie Anne from the Foundation to create a trophy for the winners of the Sonic Pi competition. In the end I was asked to create two trophies one each for the primary school and secondary school winners. With only two weeks I did not have time to create something completely new. 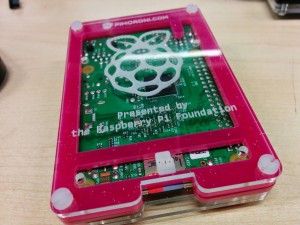 Base of the custom Pimoroni PiBow, 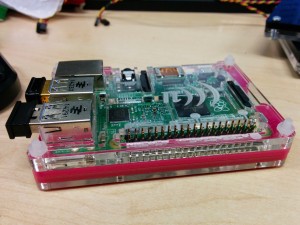 and top view of the case.

I decided to use my edge lit panel design, and with Paul’s from Pimoroni support laser cut a custom PiBow Coupé case with the Sonic Pi logo, and the Raspberry Pi logo engraved on them. I wanted to make something that was hackable and was customized for the winners, in the end I place the winning code in the background of each slide behind the Sonic Pi logo.The edge lit panels use an 8 NeoPixel bar connected to the Raspberry Pi’s GPIO, to light the engravings. It is the same effect as used by the signs that seems to float in the air. The NeoPixel bar has 3 wires soldered with female plugs on the end. The bars are connected to the Raspberry Pi’s GPIO pins; 5v, Gnd and pin 18 for the Neopixel data. I used the driver by Richard Hirst to control the NeoPixels. Enter each of the following lines one at a time.

Next you need to change a line in strandtest.py for the number Neopixels you wish to drive. Open strandtest.py with your favourite text editor. In the example below, I use nano

ctrl O and then ENTER to save file and ctrl X to exit and then run strandtest.py by entering

your NeoPixel bar should light up like a Christmas tree

And you can download the code and design files from my github account onto your Raspberry Pi, enter the following one line at a time.

and to run the code